The 1st one is 38 years old, male. lives with me. He is not mentally okay sometimes he is going crazy. He is not working.

The 2nd one is 32 years old also lives here after being divorced with her wife. He is doing some casual works around the village.

The 3rd one she is 30 years old, completed university still looking for job.

The last one she is 24 years old, married and has two kids.

I have 5 dependents, this includes my two sons, one being unemployed and one with mental inability, my mother who is 82 years old with back pain and spinal cord injury. Also, my two grandchildren whereby one is in pre-primary and another in primary school.

I was diagnosed with  HIV/AIDS in 2003 when i had a persistent cough that lasted for two weeks and when I decided to go to the hospital i was prescribed with antibiotics then the doctor told me to come back after a week where i was diagnosed with T.B, which by that time came as a shock for me since T.B was directly linked with HIV/AIDS.

In 2004 I decided to move to Moshi rural where back in the days HIV was still a new disease and stigma was at a high rate due to misinformation. Relatives including neighbors pointed fingers at me as my health deteriorated. Due to fear of public stigma, my health got even worse and my CD4’s dropped down to 98 I lost an enormous amount of weight up to 40 kg. For that situation, I was under special supervision. In March 2006 I started using ARV’s (Anti-retro viral) for the first time.

2008 I together with other victim of HIV decided to form Neema group and announced it on the church so as we can get help from the church leaders. It was a moment of joy for us because the church leader tried to worn and educate those who are pointing finger towards us. At the same time, it was a surprise because everybody in the church wanted to see us.

2009 as one among the member of Neema group, i received goats as a project in which i managed to continue with it up to now whereby I have the total number of 9 goats.

On 2011 we officially register the group and started receiving kinds of supports like foods and the same year we started providing pieces of training to the community about HIV/AIDS. Due to my health condition and some advice from a doctor I cannot do any hard work, which is extremely difficult for me because I have people who depend on me.

I am good in doing business, the retailed shop is one of my favorite things to do. I did before but all the money that I served was used to cover my medical expenses when I wa seriously sick because I don’t have health insurance. If i could get a 350000Tshs, almost 260usd I will be able to start again my business because I have a lot of customers. Also, animal keeping like goats and pig will the best option for me because I have enough experience. Your support on any of option will be much appreciated. 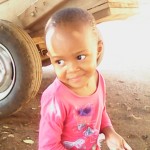